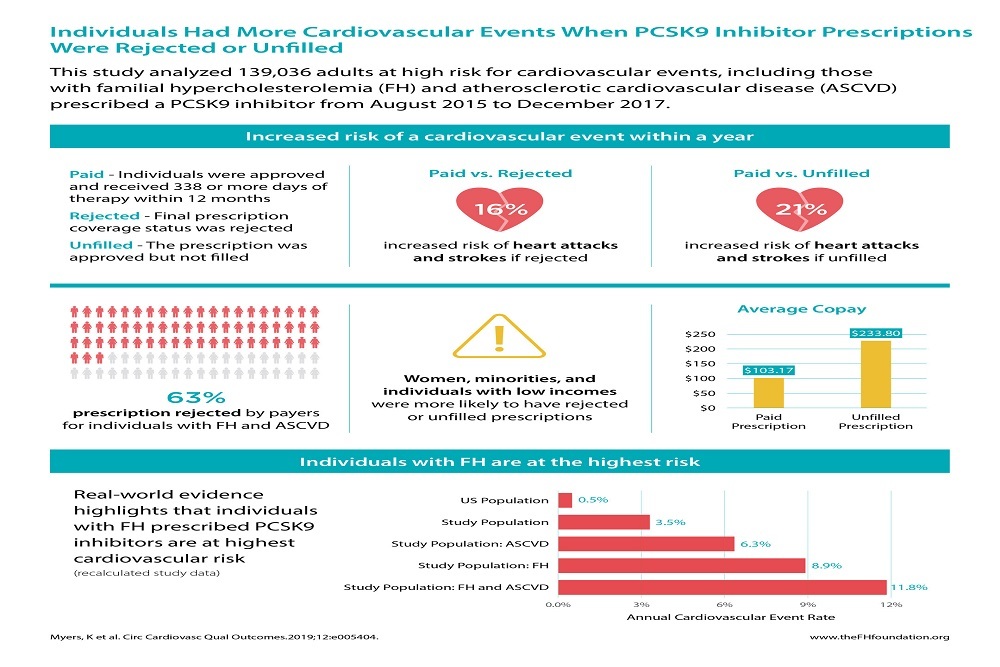 Individuals Had More Cardiovascular Events When PCSK9 Inhibitor Prescriptions Were Rejected or Unfilled. New research by the FH Foundation published in Circulation: Cardiovascular Quality and Outcomes.

New research from the FH Foundation highlights that individuals at high risk for cardiovascular events, including those with familial hypercholesterolemia (FH) or atherosclerotic cardiovascular disease (ASCVD), experienced more heart attacks, strokes and other cardiovascular events when they were unable to obtain their prescribed PCSK9 inhibitor (PCSK9i), a cholesterol-lowering treatment. The new study, published today in Circulation: Cardiovascular Quality and Outcomes, found that high-risk individuals had a 16 percent increased risk of a cardiovascular event during the 11.5-month study period when their PCSK9is were rejected by their insurance plan.

High cholesterol is a major risk for heart disease, which is the number one cause of illness and death in the United States. Statins are the first-line treatment to lower low-density lipoprotein cholesterol (LDL-C) and reduce the risk for cardiovascular events, but for some, including many with FH, that is not enough. PCSK9is have been shown to lower LDL-C and improve cardiovascular outcomes in multiple large randomized trials, yet many individuals prescribed a PCSK9i by their doctor are unable to obtain treatment.

"Over eighty thousand individuals at high risk for cardiovascular events experienced delays in treatment. Unprecedented high insurance denials, high drugs costs and related out-of-pocket costs resulted in individuals not receiving therapy and caused a significant increase in cardiovascular events, including heart attacks and stroke. In other words, real people had real heart attacks and strokes because they could not get the medicine prescribed by their doctors," said Kelly Myers, FH Foundation chief technology officer and study author.

The study also found that individuals who did not fill their prescriptions had an immediate 21 percent increased risk of a cardiovascular event during the study period.ii Approximately 65 percent of unfilled prescriptions were among Medicare patients, likely due to higher co-pay costs.

"Higher co-pays led to more individuals giving up their therapy even if they were approved. Importantly, we found that women, minorities and individuals with lower incomes who are historically undertreated for heart disease had higher rates of both rejected and unfilled prescriptions," added Myers.

The study also revealed that individuals with FH, a common and often undiagnosed genetic condition that causes high LDL-cholesterol from birth, are at an even greater risk than the study group. As a whole, the study group had a seven-times higher risk of cardiovascular events than the general population.  Specifically:

"While we know that someone who has had a heart attack or other cardiovascular event is much more likely to have a second event and is at much higher risk than the general population, this new finding underscores that individuals with FH are at as high a risk. It is imperative that we initiate comprehensive treatment early in life, and that individuals receive the medications they have been prescribed," said Daniel J Rader, M.D., chair of the department of Genetics in the Perelman School of Medicine at the University of Pennsylvania, Chief Scientific Advisor of the FH Foundation and senior author of the paper.

"This real-world evidence highlights the extreme risk FH individuals face for a heart attack or stroke if their LDL cholesterol is not adequately lowered.  Individuals like myself, who have FH and have had a heart attack, are at the highest immediate risk of a life-threatening cardiovascular event, yet health plans and payers are still rejecting over two-thirds of prescriptions for this group," said Katherine Wilemon, Founder and CEO of the FH Foundation.

About the Study
The FH Foundation used cutting-edge technology and a large healthcare encounter database including data on 139,036 adults with cardiovascular disease to identify whether rejected, unfilled or paid PCSK9 prescriptions had an impact on outcomes. A status of "paid prescription" was assigned to those who received 338 or more days of therapy within 12 months, "rejected" if the final claims status was rejected, and "abandoned/unfilled" if the prescription was approved but not filled.iii

More information, including an infographic and additional data, can be found at: https://thefhfoundation.org/research-circ-ce.

About the FH Foundation
The FH Foundation is a leading research and advocacy non-profit organization focused on reducing heart disease by driving scientific understanding and evidence-based care of familial hypercholesterolemia. Our mission is to save lives by contributing to scientific research that leads to greater understanding and improved diagnosis and treatment of FH worldwide.