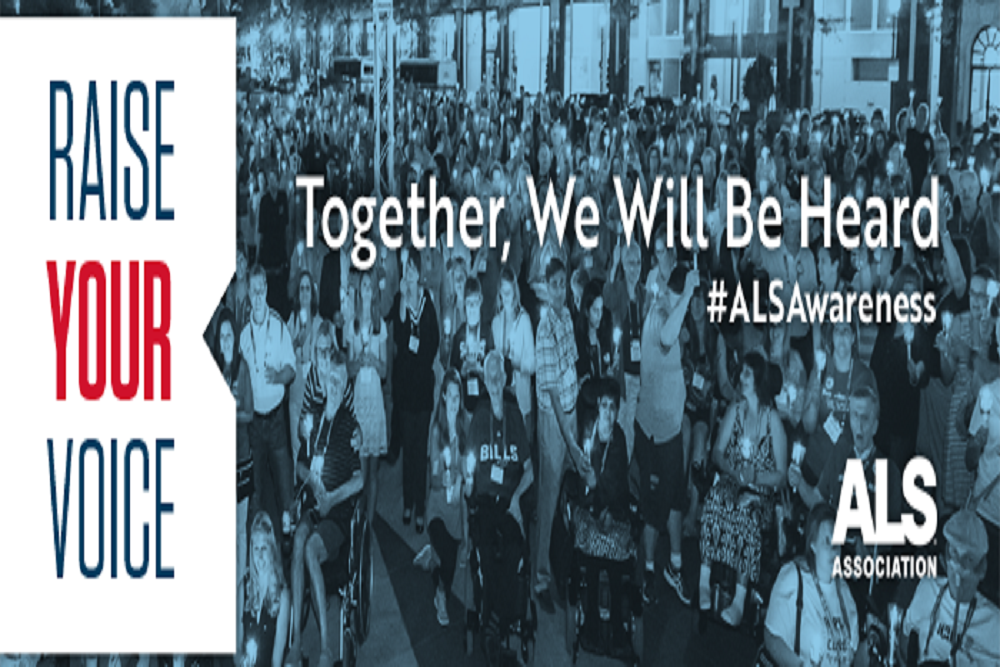 ALS Association issued the following announcement on May 1.

We’re excited to kick off National ALS Awareness Month. The next 31 days will be dedicated to education about the disease and the work happening around the world to find a cure, and to advocating for people with ALS and their caregivers.

This year, we’re asking you to Raise Your Voice to elevate the fight against ALS.

As Simon Fitzmaurice, who lost his nine-year battle against ALS in 2017, wrote in his memoir, “It’s Not Dark Yet”: “Communication is key with ALS because the disease takes away your ability to speak. But it need not take your voice.”

Your voice is more than your ability to speak. People advocate and increase awareness in many ways – through posting on social media, writing letters to members of Congress, donating to organizations and charities, and using speech generating devices and sign language to give speeches and talk to people about issues and causes that are important to them.

Even people who have lost the ability to speak deserve to be heard.

Throughout the month, we’ll be sharing stories of people living with the disease and their caregivers, the researchers around the world looking for treatments and a cure, and the health care professionals who make sure people with ALS can live their lives to the fullest.

We’ll also be launching three new public service announcements about ALS throughout the month. Each one highlights what it’s like to live with ALS.

Later this month, we will bring together more than 500 ALS Advocates at the annual National ALS Advocacy Conference to educate members of Congress about the need for better public health care and research policies.

So, how can you Raise Your Voice? Update your Facebook profile with the ALS Awareness frame. Contact your representatives in Congress. Recruit your friends to like our Facebook page or follow us on Twitter. Promote a fundraiser. Host a fundraiser. Register for a Walk to Defeat ALS or a Team Challenge ALS event.

Raise Your Voice this month to increase awareness of ALS. Together, we will be heard.