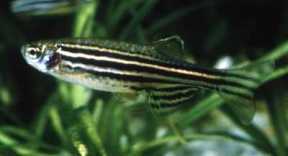 new discovery in zebrafish regeneration | Courtesy of zfin.org
Researchers from Vanderbilt University have discovered how zebrafish might recover from blinding injuries.

Scientists at the Nashville, Tennessee, university found in a recent study that low levels of a neurotransmitter, gamma-aminobutyric acid (GABA), in zebrafish cause the retina to produce stem cells.

Scientists who specialize in vision have studied zebrafish for years due to its ability to recover from eye injuries that would blind a person for life. Conclusions drawn from previous studies led scientists to believe the zebrafish's retinal cells emit a signal to support cells known as Muller gila when damaged and near death. The Muller gila cells then regress to a stem-cell like state to be used in the eye's recovery, according to a National Institutes of Health press release.

However, recent studies with mice, have shown GABA works outside of its regular function as a neurotransmitter, most notably in the pancreas and brain. A phenomenon occurring between GABA and stem cells was observed in both zebrafish retinas and the pancreas of mice.

Based on this observation, Patton and Mahesh Rao hypothesized GABA plays a role in the zebrafish's regeneration process. To test their hypothesis, the pair injected an inhibitor in the undamaged eyes of zebrafish, which triggered a regenerative response. They then measured GABA levels after inducing retinal damage on zebrafish and found the levels rose when the Muller gila cells were suppressed, confirming their hypothesis.

“This is the first report to show a regenerative role for GABA in the zebrafish retina,” Patton said.

By uncovering how the regenerative traits of zebrafish work, this study, funded by National Eye Institute (NEI), might be the first step towards learning new methods of restoring vision to the blind.

“This work opens up new ideas for therapies for blinding diseases and has implications for the broader field of regenerative medicine,” Tom Greenwell, NEI program officer for retinal neuroscience, said in the release.