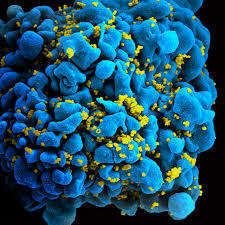 Researchers find antibodies to develop HIV vaccine | Courtesy of sciencedaily.com
Scientists from the National Institutes of Health (NIIH) have discovered that an antibody related to the early onset of HIV binds to the immunodeficiency virus and other cells rather than being destroyed as was expected, the NIH reported recently.

The surprise finding has led researchers to say they might have a new way to target HIV.

The researchers undertook a study that looked at both HIV and its equivalent among monkeys, simian immunodeficiency virus (SIV). They identified the increased presence of the protein alpha-4 beta-7 integrin on SIV-infected (and therefore HIV-infected) immune system cells, despite their belief that the protein should have been attacked by antibodies.

"We expected the antibody to attack alpha-4 beta-7 on immune cells and reduce their movement to the gut, where HIV and SIV typically decimate the cells early in infection,” Anthony Fauci, director of the National Institute of Allergy and Infectious Diseases (NIAID), part of the NIH, and coauthor of the report, said. “Instead, our team found that anti-alpha-4 beta-7 antibody binds not only to cells but also to HIV and SIV."

The researchers now believe that using a laboratory-derived antibody to attack the protein might be the way to fight HIV infection.

Last year, researchers achieved sustained SIV remission in monkeys via an antibody similar to vedolizumab, a drug used to treat people with ulcerative colitis and Crohn’s disease, but they could not identify a reason for the remission. Based on the new findings, the scientists now say the antibody probably acted against SIV growth.

"This likely explains at least in part our previous observation that SIV-infected monkeys treated with antibody to alpha-4 beta-7 and antiretroviral therapy controlled the virus very effectively long after all treatment ended," Fauci said.