Obamacare rate hikes may have helped to stall Clinton campaign 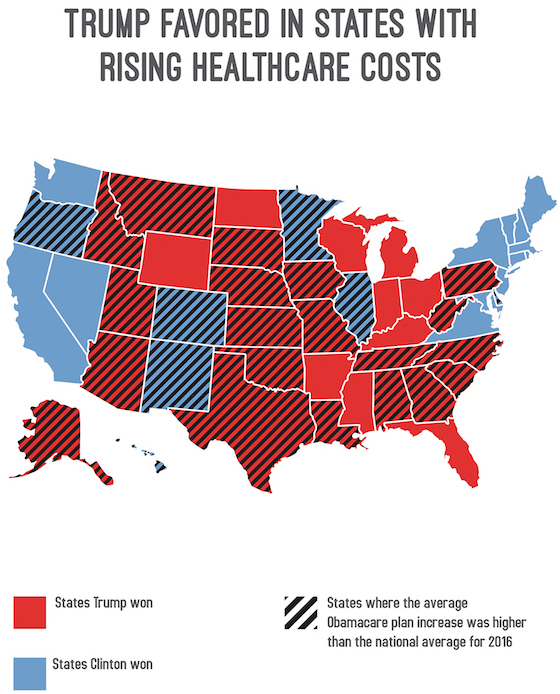 Increased premium burdens in 2016 for Obamacare users may have helped to sink Hillary Clinton’s presidential aspirations as the campaign rolled on, according to federal insurance data and a political analyst at the University of Virginia.

Those who developed a preference for Trump may have rationalized and reinforced their support for the GOP nominee in terms of issues such as healthcare costs, said Geoffrey Skelley, an analyst for The University of Virginia’s Center for Politics. And voters who remained on the fence until late in the election campaign tended to support Trump over the Democratic nominee, he said.

Skelley said premium increases in 2016, plus the 2017 rate hikes announced in October, may have tipped the Electoral College numbers in Donald Trump’s favor.

“It’s safe to say that the late October announcement of a premium hike was one more negative story in a sea of them for Hillary Clinton and Democrats in the closing days of the campaign,” Skelley told Patient Daily in an email.

Further increases in healthcare costs didn’t do Clinton any favors, election data shows. For instance, in Pennsylvania, the announced rate hike for 2017 plans was 29.08 percent; North Carolina, 19.23 percent; and Iowa, 33.41 percent. Trump carried all three of those states. The average premium increase for benchmark plans in 2017 was 22 percent.