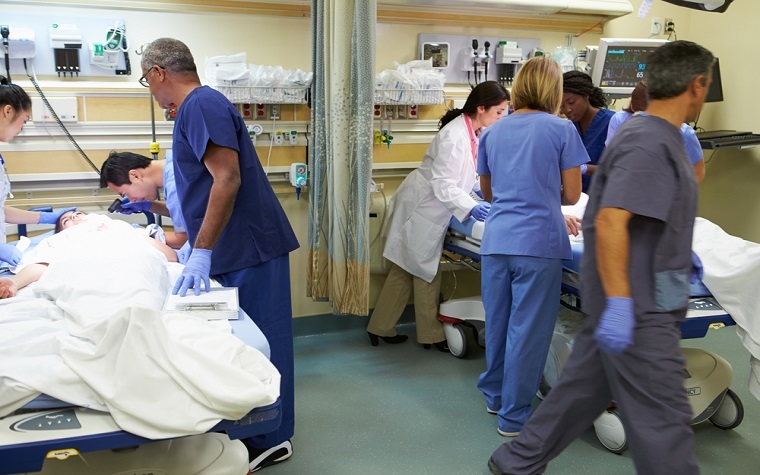 Emergency departments are being encouraged to think creatively to deal with the 'silver wave' of elderly patients. | Monkey Business Images/Shutterstock

Health systems across the country are being urged to consider establishing dedicated facilities and staff in emergency rooms to deal with the anticipated “silver wave” of elderly patients, who frequently require complex treatments.

Increasing numbers of elderly patients with complex health care needs will be turning up at emergency rooms in the coming years, according to a pioneering emergency room physician.

This is the direction health care is heading, and health systems need to be prepared, according to Dr. Ula Hwang, an emergency department physician at Mount Sinai Hospital in New York.

Hwang helped set up one of the first dedicated geriatric emergency departments in the country. It is separate from the main ER.

“We opened up in 2012 because we know the population is aging, and you need to prepare better to address the needs of the aging population,” Hwang recently told Patient Daily. “For me, it was an epiphany. As an emergency physician, I knew this phenomenon was going on for quite some time.”

Elderly patients may suffer from multiple issues that are difficult and time-consuming to diagnose properly; for example, discovering the underlying problem behind what appears to be a simple cough.

They stay longer and their diagnoses are less accurate than younger patients, the authors claimed.

“Is this the best setting for them to be in, where there are too many patients on a small area of space?” Hwang asked. “If there are more patients with the same number of staff in the same size area, can you still deliver quality medical care?”

Hwang and her colleagues concluded they could address the issue of vulnerable older patients and their care while also making it easier for staff to look after the elderly and deal with other patients.

Elderly patients, 65 and older, are first assessed after arriving at Mount Sinai; then, based on certain criteria, they are either moved to the dedicated ER unit or, depending on the diagnosis, to critical care.

Physicians, nurses and other staff with special expertise in managing the care of older people are attached to the unit. It has a pharmacist with specialized training in geriatric medicines, as well.

Hwang said that, in 2007, there were no units or systems within emergency rooms to deal with the more complicated health issues of elderly patients.

Today, there are approximately 100, she said. Some are separate units, while others have switched focus to ensure older patients are treated differently -- and with dedicated staff.

While there are many more units than a decade ago, Hwang believes all health systems should consider creative ways to deal with what she believes will be an increasingly important issue in the coming years.