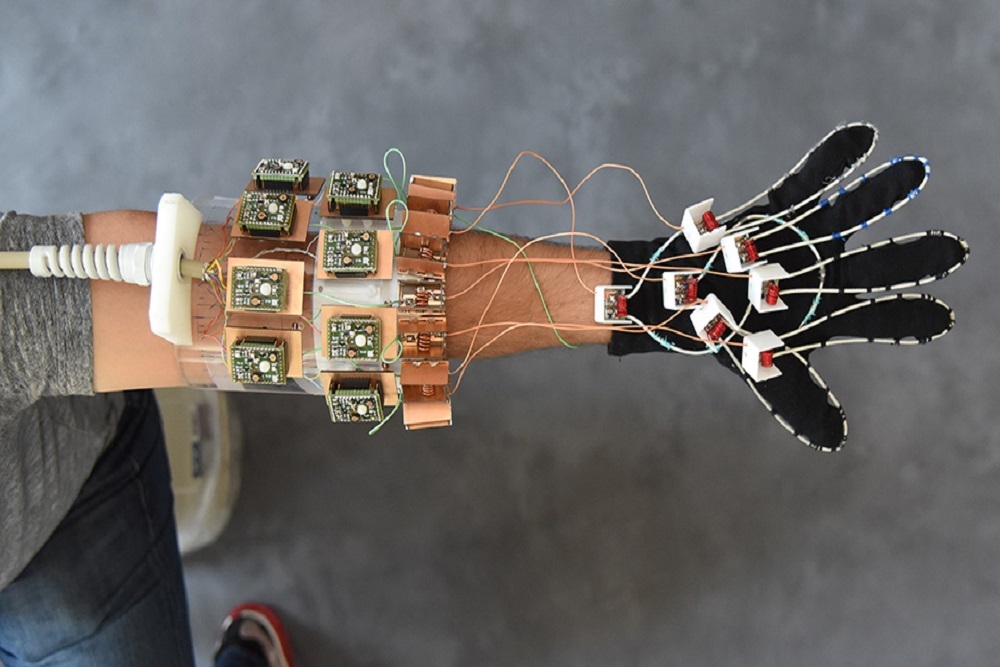 In a first for MRI, a glove-shaped detector proved capable of capturing images of moving fingers. The technology shows how tissue types move in concert, which could be useful in cataloging differences seen in injury. | Source: NYU Langone Medical Center

NYU Langone Medical Center issued the following announcement on May 9.

A new kind of magnetic resonance imaging (MRI) component in the shape of a glove delivers the first clear images of bones, tendons, and ligaments moving together, a new study finds.

Led by NYU School of Medicine and published online in Nature Biomedical Engineering, the study shows how a new MRI element design woven into garment-like detectors can capture high-quality images of moving joints for the first time.

The study authors say their MRI glove prototype promises to become useful in the future diagnosis of repetitive strain injuries like carpal tunnel syndrome in office workers, athletes, and musicians. Because the invention shows how different tissue types impinge on each other as they move, the authors say it could also enable the construction of a more versatile atlas of hand anatomy, guide surgery with hand images in more realistic positions, or aid in the design of better prosthetics.

“Our results represent the first demonstration of an MRI technology that is both flexible and sensitive enough to capture the complexity of soft-tissue mechanics in the hand,” says lead author Bei Zhang, PhD, research scientist at the Center for Advanced Imaging Innovation and Research (CAI2R), within the Department of Radiology at NYU Langone Health.

Since its emergence in the 1970s, MRI has given physicians a better look inside tissues, helping to diagnose millions of maladies per year, from brain tumors to internal bleeding to torn ligaments. Despite this impact, the technology has long struggled with a basic limitation.

MRI works by immersing tissues in a magnetic field such that any hydrogen atoms present align to create an average magnetic force in one direction in each tissue slice. These “little magnets” can then be tipped out of equilibrium by waves of electromagnetic force (radio waves). Once tipped, they spin like tops and also emit radio signals, which reveal their positions and can be rebuilt into images.

In a first for MRI, a glove-shaped detector proved capable of capturing images of moving fingers. The technology shows how tissue types move in concert, which could be useful in cataloging differences seen in injury.

Also fundamental to MRI is the ability of radiofrequency coils to convert radio waves into a detectable electric current. Unfortunately, this means that the captured (“spinning top”) radio waves produce little currents inside receiver coils, which in turn create their own magnetic fields and prevent nearby coils from capturing clean signals.

Over the last 30 years, attempts to manage interactions between neighboring coils have resulted in state-of-the-art MRI scanners in which receiver coils are painstakingly arranged to cancel out magnetic fields in neighboring coils. Once the best arrangement is set, coils can no longer move relative to one another, constraining the ability of MRI to image complex, moving joints.

As all current MRI scanners measure signals that create currents in receiver coils (detectors), such coils have always been designed as “low impedance” structures that let the current flow easily. The leap made by the study authors was to design a “high impedance” structure that blocks current, and then measures how hard the force in magnetic waves “pushes” (the voltage) as it attempts to establish a current in the coil.

With no electric current created by the MR signal, the new receiver coils no longer create magnetic fields that interfere with neighboring receivers, thus removing the need for rigid structures. The researchers found that their system, with the new coils stitched into a cotton glove, generated “exquisite” images of freely moving muscles, tendons, and ligaments in a hand as it played piano and grabbed objects.

The MRI signal is produced by hydrogen atoms (protons), and so this technology excels at imaging soft tissue structures rich in water, each molecule of which includes two atoms of hydrogen. For this reason, MRI is great at imaging muscles, nerves, and even cartilage, which are difficult to study using other noninvasive methods. Tendons and ligaments, however, which are made of dense proteins instead of fluid, remain difficult to see independently, because both appear as black bands running alongside bone.

The new study found that, in visualizing fingers as they flexed, the new coils revealed how the black bands moved in concert with the bones, which could help to catalogue differences that come with injury.

“We wanted to try our new elements in an application that could never be done with traditional coils, and settled on an attempt to capture images with a glove,” says senior author Martijn A. Cloos, PhD, assistant professor in the Department of Radiology at NYU Langone Health. “We hope that this result ushers in a new era of MRI design, perhaps including flexible sleeve arrays around injured knees, or comfy beanies to study the developing brains of newborns.”

Also leading the study was Daniel K. Sodickson, MD, PhD, vice chair for research in the Department of Radiology, director of the Bernard and Irene Schwartz Center for Biomedical Imaging, and principal investigator for CAI2R. The Center for Advanced Imaging Innovation and Research is funded by National Biomedical Technology Resource Center grant NIH P41 EB017183 through the National Institute of Biomedical Imaging and Bioengineering.