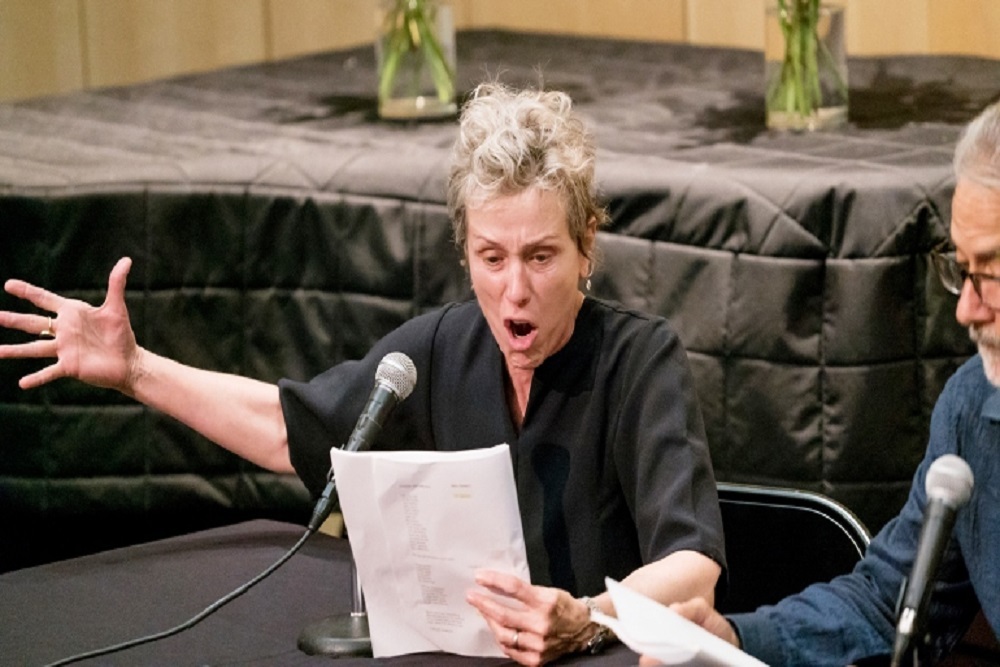 Frances McDormand reads scenes from the Sophocles tragedy Ajax as part of an event bringing attention to the impact of sudden death. Photo by Barbara Ries

With her voice breaking, UC San Francisco medical student Tiana Woolridge asked a question familiar to many embarking on a career in health care: How could she face dying patients “day after day after day,” when she could barely cope with the abrupt death of her beloved father?

Woolridge was speaking at a special event focused on the impact of sudden death, which aimed to create a safe place for open dialogue about the unique challenges facing health care trainees and professionals and featured veteran actors including two-time Oscar winner Frances McDormand.

“Sudden Death by Illness, Injury, or Choice: Modern Tragedies, Ancient Verse,” is a program of the innovative Theater of War Productions, which presents dramatic readings of ancient Greek plays to stir dialogue about difficult subjects. Actors McDormand, David Strathairn and Marjolaine Goldsmith read scenes from Sophocles’ Ajax – a 2,500-year-old tragedy about the suicide of a great warrior, in UCSF’s Cole Hall on April 18.

The presentation, directed by Bryan Doerries, artistic director of the Theater of War project, was brought to UCSF by Aenor Sawyer, MD, director of the UCSF Skeletal Health Service, and sponsored by the UCSF School of Medicine in partnership with the Jewish Family and Children’s Services.

“In health care we are necessarily held to high standards and try to project our competence and confidence. But the truth is we are all struggling with something day to day,” said Sawyer, who has experienced “sudden loss of life” professionally and personally. “The art of maintaining a dynamic balance between our vulnerability and resilience makes us better healers and better humans.”

Described as a therapy session for 300 people, the evening sparked emotional and compelling testimony from attendees, including those who had attempted suicide, those left behind by a loved one’s death, and those, like Woolridge, who care for the dying.

Woolridge, MD candidate ’19, was one of four panelists who shared their reactions after the readings. As the characters on stage raged, cried, and ultimately failed to stop Ajax’s suicide, Woolridge said she realized she could be present for her dying patients and their families simply by being vulnerable to their pain.

Doerries introduced the scenes from Ajax, a play set in the Trojan War that recounts the shaming and subsequent breakdown of Ajax, who is deemed unworthy to wear the armor of the slain Achilles. Straithairn played Ajax, and McDormand played his devoted wife, Tecmessa, who pleads with her tormented husband not to abandon her and their young son. Ajax placates her, promises to return and then impales himself upon his sword. Upon finding his body, McDormand unleashed a wail that reverberated throughout the auditorium.

The cathartic power of the performance was apparent as audience members volunteered to share their stories of pain, loss and healing. Photo by Barbara Ries

In the panel discussion that followed, UCSF Executive Vice Chancellor and Provost, Dan Lowenstein, MD, began the conversation saying quietly that he was most struck by Ajax’s failure to see or feel the love that was all around him from his wife, son and comrades in arms.

“The pathos that grabbed me – and is still there – is that he was so alone, so completely and entirely alone,” said Lowenstein, whose 24-year-old son died suddenly in 2010.

In contrast, Lowenstein said the only antidote to the profound darkness that engulfs him when he mourns is his awareness of the “infinite presence of unique love” that can come from anywhere.

Rebecca Sudore, MD, a geriatrician at the UCSF-affiliated San Francisco Veterans Affairs Medical Center, said she saw similarities between Ajax and the World War II and Korean War veterans who still suffer from survivors’ guilt. Daily, she lives the timeless lines from the millennia-old play: “Tell us how does this madness happen? Tell us and we will stay and share in the pain.”

“As a palliative care physician, I sit with them in their suffering and share in their pain,” Sudore said, with tears running down her face. “That can be very hard, but it’s very important.”

The last panelist was Ken Baldwin, a high school teacher from Calaveras County, who jumped off the Golden Gate Bridge in 1985, instantly regretted it, and survived. He said he completely identified with Ajax’s conviction that suicide was the only way out.

Panelists speak about their experiences

“On the day that I jumped, that’s how I felt,” he said. “We need to talk about this. We must get rid of the stigma of depression and suicide and talk to each other. It really helps, it helps out a lot.”

Theater of War director Doerries created “Sudden Death” in 2005 for military audiences to answer the question: How do we honor the great accomplishments of individuals without also honoring the violence that takes place in their lives? As word spread about the program’s power, medical institutions, prisons and communities across the country began requesting the program. The UCSF presentation marked the 429th performance of “Sudden Death.”

The cathartic power of the performance was apparent as audience members volunteered to share their stories of pain, loss and healing. The first to speak was a young man who said he was raised to believe his father had drowned, but when he turned 21, his mother revealed that his father had actually jumped off a bridge to his death and that days before, he had dangled his infant son out a three-story window. The now-grown son wondered what it meant: The actions of a troubled soul? Or an attempt to impart strength he did not have to his child?

“We cannot put a bow on this evening,” Doerries said at the conclusion of the performance, “but hopefully we have started a conversation.” Then he delivered what he called his nightly benediction: “You are not alone across time.”

During the reception afterward, McDormand, a veteran of the Theater of War productions, said she hears familiar stories from audiences in cities across the country.

“There was nothing unusual about the conversation tonight,” she said. “Everyone needs the same things and everybody has the same story.”

Strathairn echoed those words: “We all have some form of unresolved trauma. It doesn’t have to be a suicide. We have all been trapped in some way. The play helps us find the words.”