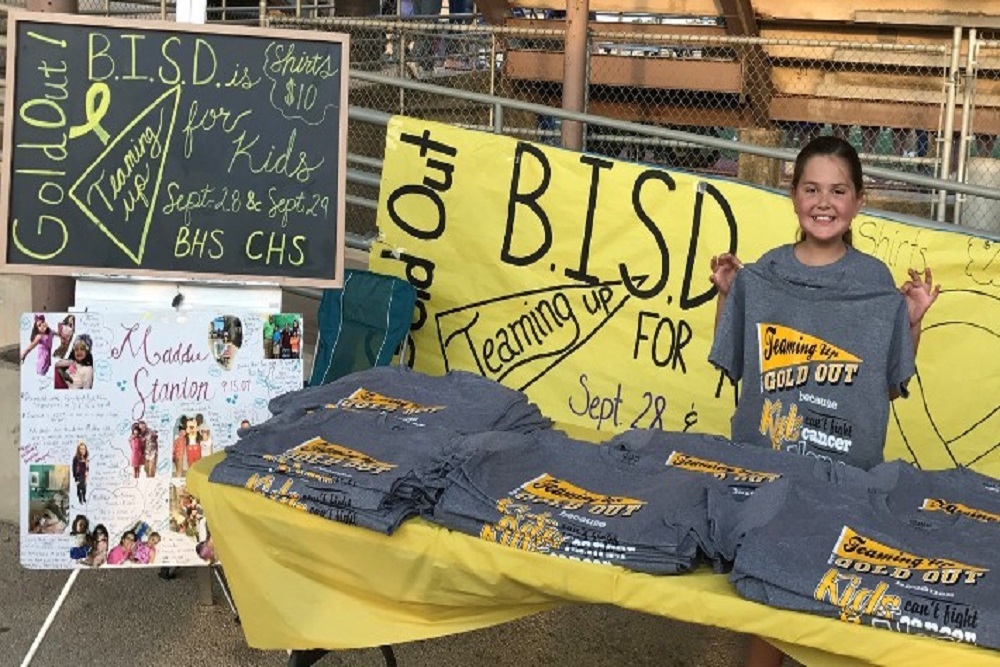 Childhood leukemia survivor Maddie Stanton describes herself as a “mainly regular” kid. “I feel good,” she says. Now 10 years old and in the 4th grade, Maddie works hard in school and loves dancing and arts and crafts. Her mother, Denise, says, “We feel lucky every day to be able to have Maddie enjoying life, and being happy, and living.”

A world of confusion

Maddie was just 6 when she began having the bouts of severe back pain that led to doctor’s office appointments, emergency room visits, and hospital stays. At first, doctors thought Maddie had muscle strain from gymnastics classes. Later, they changed the diagnosis to constipation. But the pain didn’t go away or get any better, and Maddie also developed a low-grade fever.

In July 2014, Maddie underwent an MRI of her spine and biopsy of a suspicious spot. Doctors told Maddie’s parents she had acute lymphoblastic leukemia (ALL), and her treatment would likely involve several years of chemotherapy. And she would need to begin treatment the very next day. Hearing the news was “an-out-of-body, out-of-this-world feeling,” said Denise. “We felt as if we had no control or ability any longer to keep our daughter safe.”

Maddie was stoic through her first chemo induction. “She’s a pretty tough cookie,” says Denise. And she was discharged from the hospital shortly afterward. A few weeks later, the family showed Maddie’s medical records to a friend of theirs – an oncologist and hematologist – to get a second opinion. He found that Maddie actually had hypodiploid ALL, a rare, high-risk type of leukemia that does not have a high long-term survival rate when treated with chemotherapy alone.

He referred Maddie to an oncologist at Texas Children’s Hospital in Houston. Maddie’s new medical team said she’d need a bone marrow transplant (also called a stem cell transplant) as soon as possible to have her best chance at long-term survival. The Stanton family, who lived more than 200 miles away in Boerne, Texas, began preparing to move to Houston.

Maddie’s big brother Jack badly wanted to donate his bone marrow to help Maddie get better, but unfortunately, he was not a match. The donor’s tissue type has to match the patient’s tissue type as closely as possible to help prevent risk of major problems with the transplant. Maddie’s medical team turned to Be The Match, a marrow registry operated by the National Marrow Donor Program. Within a short time, a perfect match for Maddie was found through the registry.

Preparation for bone marrow transplant involves intense chemotherapy to get rid of any underlying cancer cells. This is called the conditioning phase which typically takes a week or 2 and can be tough on the patient. Maddie received high-dose chemotherapy and radiation to destroy the cancer cells in her bone marrow and make room for new cells from her donor. She also received several other medications to ease side effects caused by the treatments, including painful mouth sores.

In November 2014, Maddie received her transplant, getting an infusion of new bone marrow cells prepared from her donor’s cells. Then came the waiting time, as the family waited to see if the transplant was successful, a process called engraftment. After about 4 weeks into her recovery, the Stantons learned that Maddie’s donor bone marrow had fully engrafted. The transplant had been successful. But it would still be many months before they could return home to Boerne because she had to be closely monitored for problems.

At first, Maddie visited the bone marrow transplant clinic 3 times a week and over the course of 5 months, reduced those to once a week. She finished 1st grade through a homebound education program while Jack attended a local school. But Maddie developed complications from the transplant including life-threatening kidney problems. By December 2015, the medical team got her complications under control and the family was finally able to return home.

Getting the word out

Parents don’t need to feel like no one can understand what they’re going through. People are out there and they want to help.

In February 2018, Maddie joined other pediatric cancer survivors in Houston for a fashion show to raise money for research at the Texas Children’s Cancer Center. Back in Boerne, the Stantons continue to do everything they can to help other children going through a cancer diagnosis and treatment. “We are grateful for everybody who helped us,” said Denise. “It’s part of who we are as a family now, to give back.”

Through their experience with Be The Match, the Stantons learned that having a white, northern European heritage like theirs made it easier to find a match for Maddie. African-American, Asian, American Indian, Hispanic, or mixed heritage makes finding a match harder. That’s why Be The Match badly needs people who identify as members of these groups to join the registry and be committed to following through with a transplant if they’re called – especially people between the ages of 18 and 44, because transplants from people in this age group are more likely to be successful. The Stantons are trying to get the word out to as many young people as possible. As part of a local bone marrow drive, Maddie and Denise appeared in a video explaining the need for donors.

They also take part in countless local fundraisers to support pediatric cancer organizations. They include Cookies for Kids Cancer, which raises money for research grants through bake sales, and His Grace Foundation, which provides physical, emotional, and financial aid for patients and families on the bone marrow transplant unit of Texas Children’s Hospital.

Local high school volleyball and football teams have also gotten into the act through “goldout” games every September, which is Childhood Cancer Awareness Month and is symbolized by a gold ribbon. Those attending the games are encouraged to wear gold t-shirts. Sales of the shirts raise money for pediatric cancer research.

“There’s a lot of really good help out there,” says Denise. “That’s the most important thing for people to know when their child gets cancer. Ask for help, find out what nonprofit groups are out there. Parents don’t need to feel like no one can understand what they’re going through. People are out there and they want to help.”

Give us your feedback